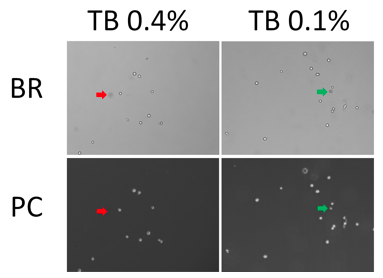 These studies reveal that over a time course analysis in standard cell culture, TB exclusion reports more viability in comparison to the fluorescence-based tools, although the studies did not speculate as to the reasoning behind the differences noted (Jones and Senft 1985; Mascotti et al. 2000). In this work, we perform a head-to-head comparison between cell viability as determined by TB and that determined by AO/PI using an automated image-based cytometer, the Cellometer. Image-based cytometry allowed us to examine the morphological changes that occur in TB-stained cells, and these may explain the differences in viability counts reached by the two methods.