One of the most common and popular methods for cell cycle detection is the use of fluorescence-based dyes. There are a number of fluorescent-based dyes that are capable of binding to double stranded DNA upon cell fixation. Propidium iodide (PI) and DAPI are two such dyes. Since the amount of bound fluorescent dye is directly proportional to the amount of DNA present within a cell, these dyes can be used to detect the cell cycle within a population of cells. 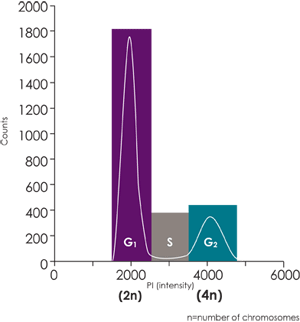 The Cellometer instrument acquires a bright-field and a fluorescent image for each sample tested. The bright-field image allows researchers to verify cell morphology, evaluate the degree of homogeneity of the sample, and identify the presence of cellular debris

Once counting is complete, a cell cycle histogram is automatically generated for each sample using the optimized Nexcelom cell cycle data layout in FCS Express 4 Flow Software. Gating can be manually optimized directly on the histogram with automatic update to the associated data table.

In this example, untreated Jurkat cells were used to analyze cell cycle kinetics. The cells were ethanol fixed, stained with propidium iodide cell cycle reagent, and 20 µl of cell sample was loaded into a Cellometer counting chamber.  The counting chamber was inserted into the Vision CBA Analysis System, and imaged in both bright field and fluorescence. The fluorescence intensity histogram and associated data table was generated in FCS Express 4 software. 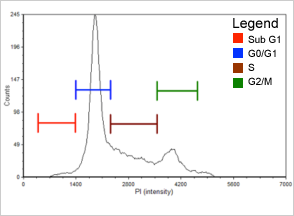 Table 1. An automatic data table is generated. The table contains the percent of gated cells at each cell cycle phase as well as cell concentration.