Glioma is one of the most common malignant brain tumors, comprising 40-50% of intracranial tumors, and up to 80% of all malignant brain tumors (1,2). Due to the high invasiveness and strong proliferative activity of this type of cancer, therapeutic efficacy and disease outlook are usually very poor, with a median survival period of only about 14 months (3).

As is often the case with many cancers, the exact mechanisms that lead to the development of glioma are unclear. Factors that may contribute include diet and lifestyle choices, inherited polymorphisms in DNA repair genes, and hereditary disorders such as neurofibromatosis, turcot syndrome, and li Fraumeni syndrome (4).

Targeted molecular therapies against glioma are currently lacking, though the targeting of cellular pathways frequently altered in glioma has shown some promise in preclinical studies (5).

MEX3A is a protein in the MEX3 family involved in the post-transcriptional regulation of other genes, whose relationship with other malignant tumors has been revealed in previous reports (6). In this study, the researchers explored the association between MEX3A and glioma utilizing several molecular biology techniques. As described below, the Celigo Imaging Cytometer was a valuable tool in assessing the role of MEX3A in the progression of glioma.

Establishing the Role of MEX3A in Glioma

The researchers in this study first utilized various techniques to explore the role of MEX3A in glioma, including immunohistochemistry to assess MEX3A expression levels in glioma tissues, knockdowns of MEX3A in conjunction with a transwell assay to assess migration and an in-vivo mouse model of tumor burden. The data from all these experiments conclusively demonstrated that MEX3A plays an important role in glioma progression, as the glioma cells were less aggressive in general when MEX3A was knocked down in all of these models.

Next, to determine what downstream factors are important in glioma progression via MEX3A, the researchers conducted gene expression profiling to determine which genes are differentially expressed when MEX3A is knocked down. CCL2, a cytokine important for the recruitment of various types of immune cells, was identified in this screen. Analysis with Co-immunoprecipitation (co-IP) confirmed a direct interaction between MEX3A and CCL2, establishing a high likelihood that MEX3A promotes glioma via the regulation of CCL2.

After knocking down CCL2 in glioma cells, the researchers required an easy method to assess the effect of cell proliferation. The Nexcelom Celigo Imaging Cytometer software employs advanced algorithms in brightfield to detect adherent cells in microwell plates without the use of any label or trypsinization (Figure 1). The user can acquire cell counts in all the wells on a 96 well plate in less than 5 minutes, providing unparalleled speed and convenience for cell proliferation assays. 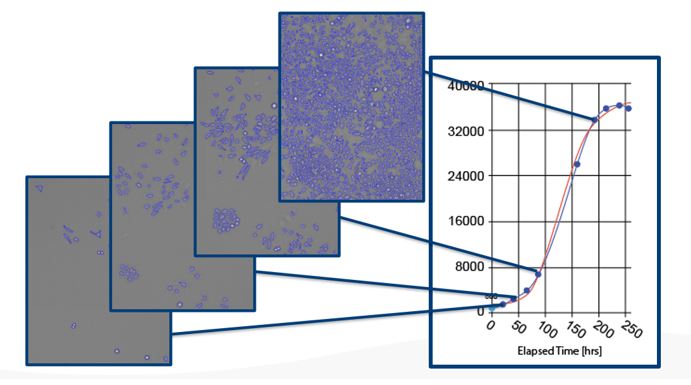 Figure 1: Celigo images and counts cells in the same wells over time. The cell proliferation curve on the right is generated on the Celigo software without any third-party application. The Celigo software also allows data to be exported and plotted with other additional software when needed.

The Celigo was used for quantification of cell growth over 5 days, definitively demonstrating that CCL2 is important for the proliferation of glioma cells (Figure 2).

Figure 2: CCL2 is important for glioma cell proliferation. SHG-44 cells were seeded into a 96-well plate with a cell density of 2000 cells/well 72 hours after lentivirus transduction. Cells were cultured in a DMEM medium containing 10% FBS for 5 days. Cells were imaged and quantified using a Celigo Imaging Cytometer (Nexcelom Bioscience) once a day. Figure and text adapted from Yang et al, 2021.

Figure 3: MEX3A overexpression leads to increased cell proliferation. SHG-44 cells were seeded into a 96-well plate with a cell density of 2000 cells/well 72 hours after lentivirus transduction. Cells were cultured in a DMEM medium containing 10% FBS for 5 days. Cells were imaged and quantified using a Celigo Imaging Cytometer (Nexcelom Bioscience) once a day. Figure and text adapted from Yang et al, 2021.

Celigo is a robust tool for oncology studies

As evidenced by the hundreds of customer publications that employ Celigo, our imaging cytometry technology is of very high utility in oncology research. In addition to the cell proliferation experiments completed in this publication, the system can employ multiple fluorescent channels and reagents to detect apoptosis, conduct cell cycle analysis, and measure transduction efficiency, among other applications. The instrument’s F-Theta lens technology can also be used to rapidly assess the migration and invasion of cancer cells in several in vitro 2D and 3D assays. In addition, the Celigo technology can also easily measure effector cell killing during in vitro immuno-oncology experiments. If you would like to learn more, contact us today for more information or a live demonstration.