Chinese hamster ovary (CHO) cells are the cell type of choice for biopharmaceuticals due to their propensity to correctly fold and post-translationally modify human proteins [1]. Here, researchers use an optimized bioinformatics tool (“CRISPy”) to generate chimeric RNA called “single guide” RNA (sgRNA) in order to disrupt FUT8, a gene that is utilized in N-glycosylation. This novel web-based tool ensures efficient, fast, and low-cost genetic manipulation of CHO cells for future biopharmaceutical applications.

CHO cells were cultured and transfected by Nucleofector Kit V with 1 μg of Cas9 plasmid and 1 μg of sgRNA plasmid. Two days later, cells were transfected with pmaxGFP and assessed for transfection efficiency using Nexcelom’s Celigo.

*Note:  For more detailed Materials and Methods and a complete account of the entire study, please refer to the original manuscript [http://onlinelibrary.wiley.com/doi/10.1002/bit.25233/abstract] 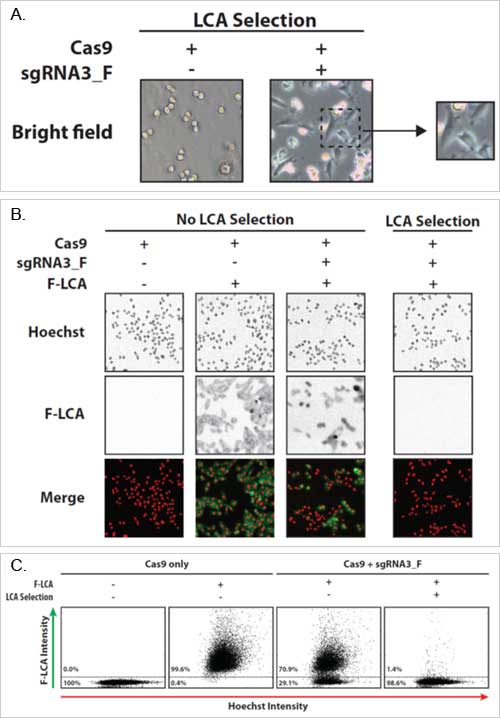 Figure 1A-C. Phenotypic analysis of FUT8 knockout cells. Cells were transfected with either Cas9 plasmid alone or Cas9 plasmid plus sgRNA. At Day 6 the bright field images were taken (A). On Day 13 the cells were stained with Hoechst (red) and fluorescein-labeled LCA (green). Quantification of the images for F-LCA positive (wild-type FUT8) and F-LCA negative (FUT8 knockout) can be seen in C.