Cultures maintained by enzymatic passage result in the formation of a heterogeneous embryoid bodies population, varying in size and morphology, and in the ultimate yield of differentiated cells. Recent efforts to enrich EBs of preferred size to increase differentiation potential have included biocompatible coatings (Valamehr et al. 2008), microcontact printing (Bauwens et al. 2008), and forced aggregation systems (Burridge et al, 2007) with some success. The EB Generation Application on LEAP™ (Cyntellect, Inc.) was introduced, enabling the automated generation of EBs of specific sizes. These developments for improved embryoid body generation have led to a need for routine quality assessment of the embryoid body number, size and shape. 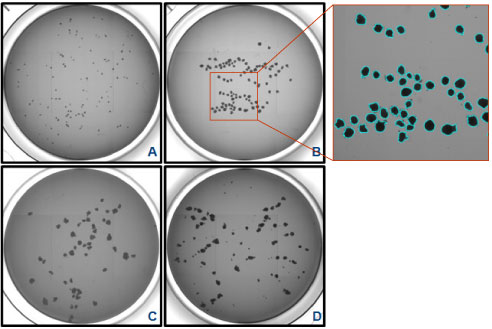