With the Cellometer Vision, Auto 2000, and K2 just 20µl of sample is added to the Cellometer Counting Chamber. Imaging and analysis of the samples is completed in less than 30 seconds. Bright field and fluorescent cell images can be viewed to check cell morphology and verify cell counting. Total cell count, concentration, and mean diameter are automatically displayed. 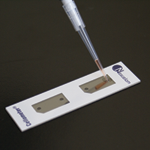 1. Pipette 20 µl of sample into a disposable slide 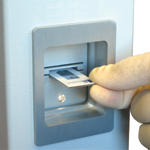 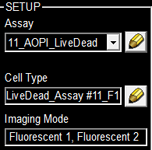 Tumor digest samples are collected from the patient at the primary source of the tumor. Solid tumors are first digested and processed before they are utilized in experiments. These are inherently messy samples. They may contain tissue fragments and cellular debris making it difficult to identify and count cells of interest. With AO/PI only the nucleated cells are stained and analyzed.

The Cellometer line of instruments can quickly and accurately obtain the viability of the cell sample by trypan blue or fluorescent methods. Additionally, the system automatically reports an accurate cell count, concentration, and cell size in a single 20 µl assay. The fluorescent based Cellometer instruments (Auto 2000, Vision, and K2) also allow researcher to count the total number of nucleated cells in a fresh clinical sample without the need to lyse red blood cells. The table below outlines the recommended Cellometer instrument and assay use for each selected application.

Please contact an application specialist to determine which Cellometer is right for you!