Autophagy is a normal process by which eukaryotic cells break down out-dated and damaged cellular organelles and proteins to be replaced with new ones. It is also a survival mechanism providing cells with energy and substrates for cellular processes in times of stress and starvation. Autophagy is a multi-step process involving initiation, formation of autophagosomes (vesicles that capture and deliver cytoplasmic material to lysosomes for digestion), maturation, and degradation (Figure 1.) 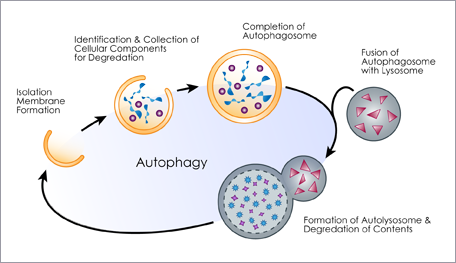 The process is controlled by a set of autophagy-related genes (ATG), which can also be influenced by several different cellular pathways, with a number of different positive and negative regulators. In addition to the traditional functions of autophagy in nutritional homeostasis and cellular damage control, the autophagy pathway has been shown to play a critical role in the degradation of intracellular bacteria and viruses (known as xenophagy), normal immune response and antigen-presentation, and the negative regulation of innate and inflammatory signaling.

Defects in autophagy in the brain have been linked to the accumulation of aggregation-prone proteins and damaged organelles causing neurodegenerative diseases such as Huntington’s and Parkinson’s diseases.  Autophagy defects in other tissues have been linked to premature aging, muscular disease, chronic inflammatory diseases such as cysctic fibrosis and Crohn’s disease, autoimmune disease, and some cancers, perhaps due to increased cell susceptibility to DNA damage. Restoration of autophagy may be central to the development of future therapeutics for some of these disorders.

In many cases, bacteria, viruses, and cancer cells have evolved to block autophagy and / or utilize normal autophagy functions to their advantage.  In some cases, autophagy has been shown to promote tumor progression and survival by facilitating glycolysis and oxidative metabolism in nutrient-poor tumor environments. In such cases, inhibition of autophagy has been shown to increase susceptibility to radiation treatment and chemotherapy. Increased measurement of autophagy in patients is critical for determining the effective use of autophagy inhibition and stimulation in the treatment of various forms of cancer and other diseases.

For detection of autophagy using image cytometry, a small aliquot of live cells are incubated with a cationic amphiphilic tracer (CAT) dye that generates bright green fluorescence upon selective incorporation into to pre-autophagosomes, autophagosomes, and autolysosomes. Bright-field counting is used to identify and count all cells and counting in the green fluorescence channel is used to calculate the percentage of cells in a population undergoing autophagy. 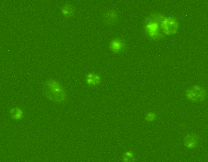 The Cellometer Vision CBA Image Cytometry System and Cyto-ID Green dye from Enzo Life Sciences provide a simple, accurate method for the measurement of autophagy. This method can be used in place of labor-intensive bench-top methods, such as SDS-Page and western blotting, and expensive, complex flow cytometry methods.