Challenges arise with the supply and demand of RBCs for blood transfusions. The standard clinical practice of using donor-supplied RBCs is associated with significant challenges including limited donor supply, the risks of pathogen contamination, and potential alloimmunization even with standard blood compatibility testing. Mature RBCs that lack nuclei and the ability to proliferate can be generated from adult bone marrow hematopoietic stem and progenitor cells, by proliferating progenitor cells called erythroblasts. Challenges remain in the production of sufficient quantities of erythrocytes due to the limited differentiation potential of these cells

In the present study (Liu et al, 2021), researchers investigated the potential of BMI1 expression to expand erythroblast progenitors in culture, ultimately for terminal differentiation and production of RBCs. The results of the study indicate that BMI1 gene expression causes expanding erythroblasts to effectively repress spontaneous differentiation. The cells are also karyotypically normal and able to terminally differentiate to RBCs when induced, providing a potential solution to blood transfusion supply challenges.

To aid in the accurate determination of these findings, researchers examined the proliferation of erythroblast cultures utilizing a Celigo high-throughput image cytometer. The Celigo provides rapid imaging to detect and quantify the fraction of EdU-labeled cells and DAPI-labeled cells in easily prepared microwell plates, enabling the quantification of proliferating erythroblasts. 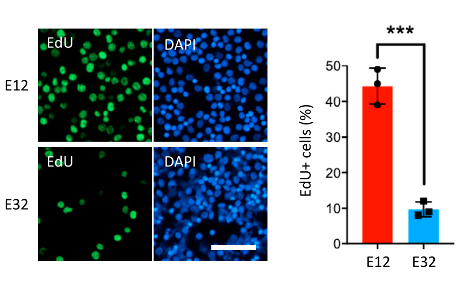 The DNA synthesis-based assay for cell proliferation was performed using EdU, a nucleotide analog marker for DNA synthesis, and 4′, 6-diamidino-2-phenylindole, dihydrochloride (DAPI). Cells were incubated in the Edu solution for four hours, fixed, and stained with anti-EdU antibody and DAPI. A proliferation index was then determined for the different cultures by quantifying the fraction of EdU-labeled cells compared to DAPI-labeled total cells using a Celigo high-throughput microwell image cytometer. 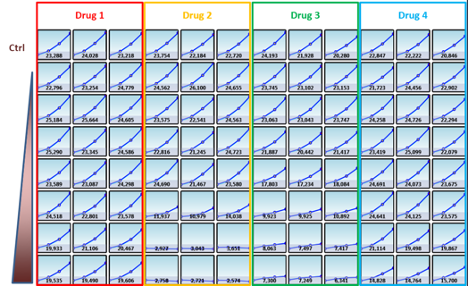 The Celigo provides an easy, reliable, and fast solution for cell proliferation and counting assays, performing direct measurements of cell numbers in each well with both adherent and suspension cell lines. The system images the entire well and counts every cell in every well, even if cells are clumped around the edges or unevenly dispersed. The Celigo simultaneously monitors the growth for every well and uses visualization tools to show quantitative growth curves for the individual wells.

Celigo proliferation assays can be an end-point or can be run in a kinetic manner, with the software conveniently grouping each timepoint under the same plate ID for easy data recall and visualization. Data can be easily exported for graphing on third-party software.

Figure 3: Celigo can be utilized for endpoint (top) or kinetic (bottom) growth studies

Direct Cell Counting and Confluence Measurements in Brightfield and Fluorescence

Cells can be directly counted in brightfield using direct cell counting or confluence applications, as well as with fluorescence, such as with Edu/DAPI. The Celigo software features a flow-cytometry-like gating interface, which can be used to segment out different cell populations based on DAPI and Edu intensity to quantify exactly how many cells are falling into the different cell cycle stages (Figure 5). Edu/DAPI for cell cycle has been performed on Celigo in several publications (1,2,3). 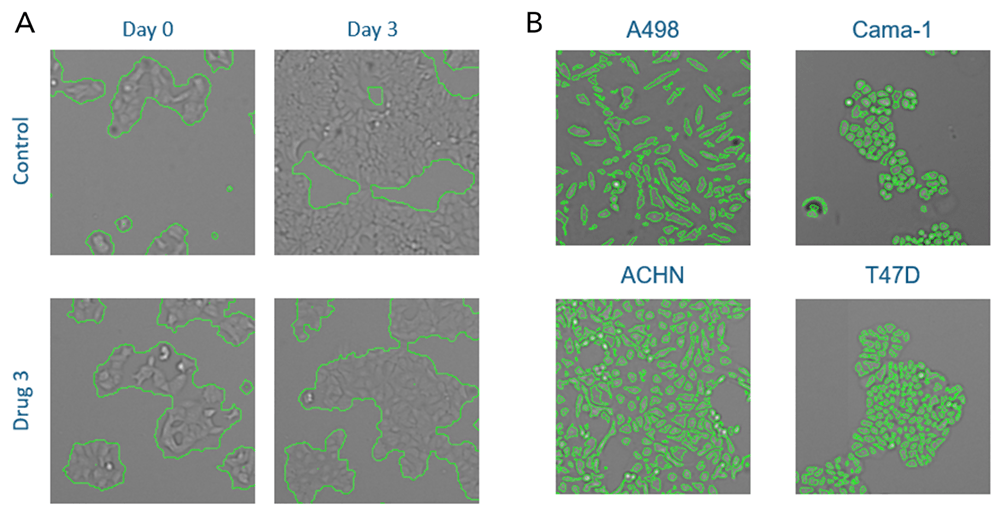 Figure 4: Cell proliferation can be directly measured in Brightfield using Confluence (A, left) or by Direct Cell Counting (B, right). Cells of different sizes and morphologies can be directly detected and quantified. 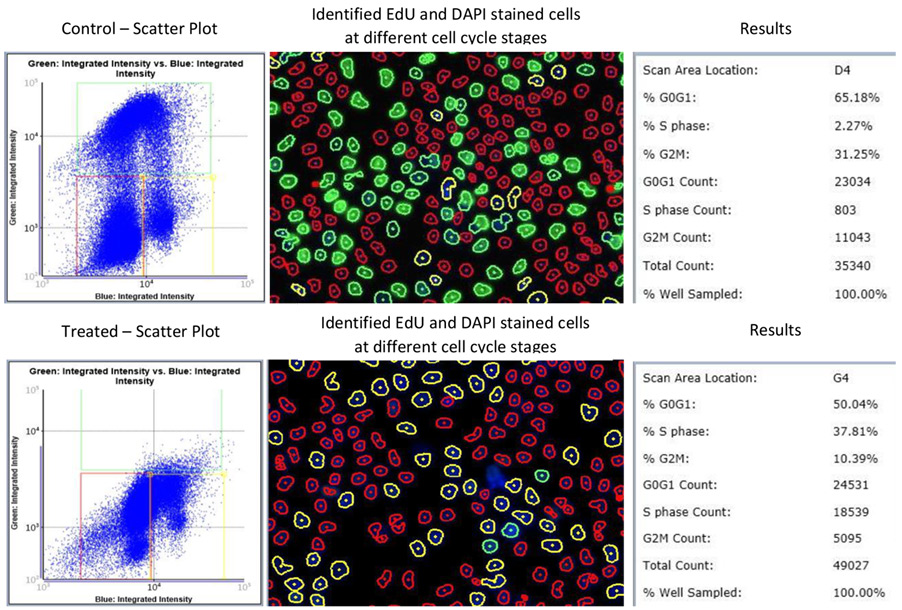 This study demonstrates the Celigo imaging cytometer’s wide range of capabilities for cell counting, proliferation, cell cycle, and other assays for whole-well live-cell analysis and cell sample characterization in brightfield and fluorescence. Celigo increases the throughput with reliability and speed while achieving best-in-class brightfield imaging for each well to directly count cells without labeling. When applicable, fluorescence can be used to identify cell populations, such as in experiments quantifying cell viability, expression analysis, apoptosis, cell cycle, and more.

Celigo’s ability to perform simultaneous imaging and analysis allows researchers to link the instrument with automation systems, such as our stacker platform, to easily perform overnight measurements of dozens of plates for toxicity, expression, proliferation, or other kinds of studies. 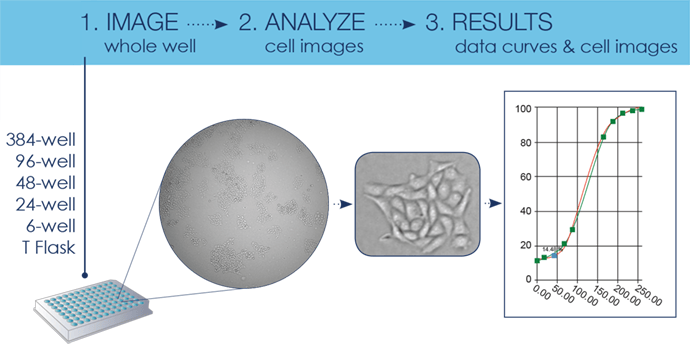