What are Cytopathic Effects?

Cytopathic effects (CPE) are indicated by the changes in host cell morphology which are caused by the target infecting virus [REF Medical Microbiology. 4th edition. Chapter 44 Effects on Cells]. The common visual observations of the host cells are swelling or shrinkage, rounding, lysis, plaques, clumping, syncytia, and inclusions. In general, the viruses with the ability to cause degeneration of the host cells are called cytopathogenic. There are varying degrees of cytopathic effects caused by different viruses, where some can completely and rapidly destroy host cell monolayer while other viruses alter the morphology of the host cells [REF Erica Suchman, Carol Blair. 2007. Cytopathic effects of Viruses Protocols].

Have questions about your virology assays?

The Celigo Image Cytometer is a sophisticated plate imager that can rapidly analyze cytopathic effects by imaging the entire microplate in bright field and fluorescence. Using the powerful built-in image analysis software, the Celigo can quickly generate counts of plaques, foci, and individual infected cells, morphological measurements, as well as fluorescent intensity. It can analyze the cytopathic effect using different image analysis and counting methods that are tailored to the virus and host cell pairing. Scientists can perform high-throughput automated imaging and analysis of the cytopathic effect in plates using bright field imaging without any labeling.

The Celigo Image Cytometer uses proprietary image analysis algorithms that have been optimized for a unique Virology Application Suite in the software. There are 3 image analysis methods for quantifying cytopathic effects, including the destruction of cell monolayer, reduction in host cell count, and morphological changes at an individual cell level.

The pseudo-green color shows where cells are present and that area is quantified and compared between different viral treatments.

2. Count the total number of cells in each well

The green outlines identify the counted cells in the well. Cytopathic effects will be indicated here by an overall reduction in the number of cells.

3. Measure the morphological changes of the host cells

The aspect ratios are measured from the counted cells to quantify the morphological changes. The rounding up of the host cells can be an indication of cells dying and this difference in morphology from the healthy cells can be quantified. 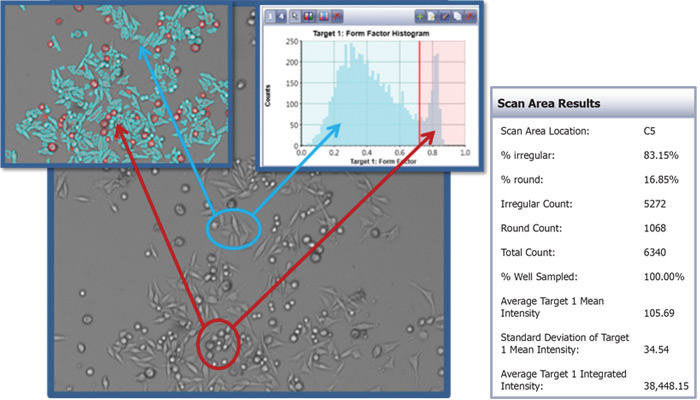 Below is an example of Vero cells that have been infected by SARS-COV-2 for 48 hours, which show a loss of monolayer as well as rounding and swelling.